Yoho National Park scenic drives mean you don’t need to travel deep into the backcountry to view the most spectacular features. The following sights are listed from east to west, starting at the park boundary (the Continental Divide). 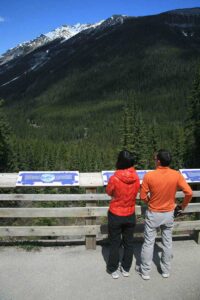 The joy CPR president William Van Horne felt upon completion of his transcontinental rail line in 1886 was tempered by massive problems along a stretch of line west of Kicking Horse Pass. Big Hill was less than five kilometres (3.1 miles) long, but its gradient was so steep that runaway trains, crashes, and other disasters were common. A trail from Kicking Horse Campground takes you past the remains of one of those doomed trains. Nearly 25 years after the line opened, railway engineers and builders finally solved the problem. By building two spiral tunnels down through two kilometres (1.2 miles) of solid rock to the valley floor, they lessened the grade dramatically, and the terrors came to an end. Today the Trans-Canada Highway follows the original railbed. Along the way is a viewpoint with interpretive displays telling the fascinating story of Big Hill. 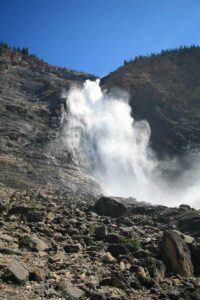 Fed by the Wapta Icefield in the far north of the park, the Yoho River flows through this spectacularly narrow valley, dropping more than 200 metres (660 feet) in the last kilometre (0.6 mile) before its confluence with the Kicking Horse River. The road leading up the valley passes the park’s main campground, climbs a very tight series of switchbacks (watch for buses reversing through the middle section), and emerges at Upper Spiral Tunnel Viewpoint, which offers a different perspective on the aforementioned tunnel. A further 400 metres (0.2 mile) along the road is a pullout for viewing the confluence of the Yoho and Kicking Horse Rivers–a particularly impressive sight as the former is glacier-fed and therefore silty, while the latter is lake-fed and clear. Yoho Valley Road ends 14 kilometres (8.7 miles) from the main highway at Takakkaw Falls, the most impressive waterfall in the Canadian Rockies. The falls are fed by the Daly and Des Poilus Glaciers of the Waputik Icefield, which straddles the Continental Divide. Meaning “wonderful” in the language of the Cree, Takakkaw tumbles 254 metres (830 feet) over a sheer rock wall at the lip of the Yoho Valley, creating a spray bedecked by rainbows. It can be seen from the parking lot, but it’s well worth the easy 10-minute stroll over the Yoho River to appreciate the sight in all its glory. 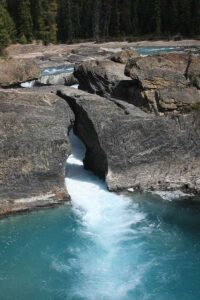 Three kilometres (1.9 miles) west of Field is the turnoff to famous Emerald Lake. On your way out to the lake, you’ll first pass another intriguing sight. At Natural Bridge, two kilometres (1.2 miles) down the road, the Kicking Horse River has worn a narrow hole through a limestone wall, creating a bridge. Over time, the bridge will collapse and, well, won’t be such an intriguing sight anymore. A trail leads to several viewpoints. You’ll probably see people clambering over the top of the bridge, but resist the urge to join them–it’s dangerous and not recommended.

Outfitter Tom Wilson stumbled on stunning Emerald Lake while guiding Major A. B. Rogers through the Kicking Horse River Valley in 1881. He was led to the lake by his horse, which had been purchased from natives. He later surmised that the horse had been accustomed to travelling up to the lake, meaning that the horse’s former owners must have known about the lake before the white man arrived. One of the jewels of the Canadian Rockies, the beautiful lake is surrounded by a forest of Engelmann spruce, as well as many peaks of more than 3,000 metres (9,840 feet). It is covered in ice most of the year but comes alive with activity for a few short months in summer when hikers, canoeists, and horseback riders take advantage of the magnificent surroundings. 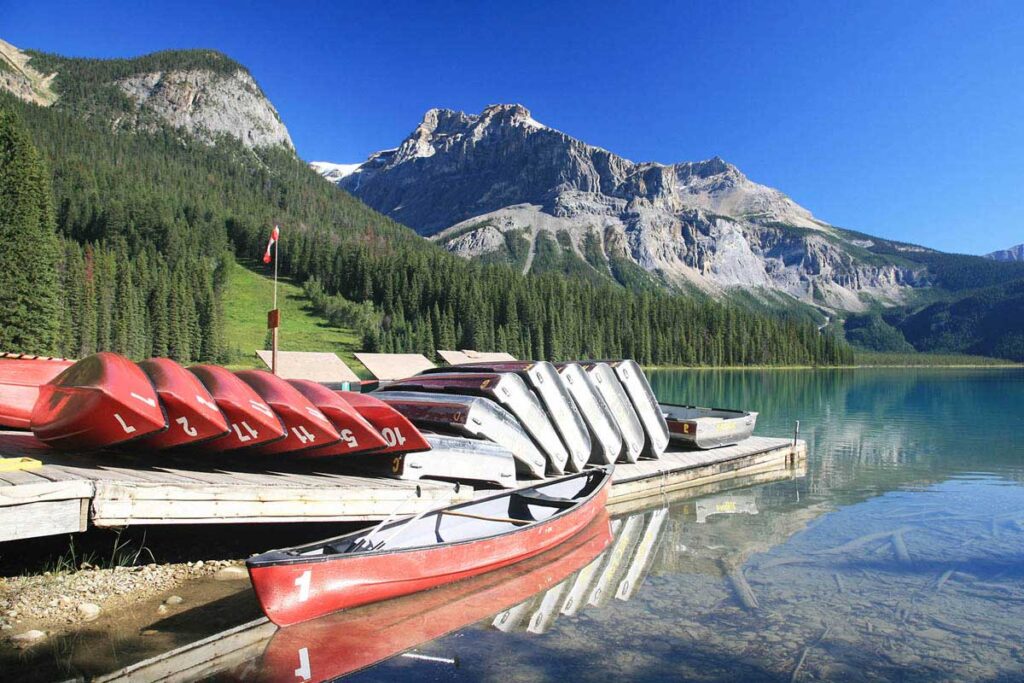