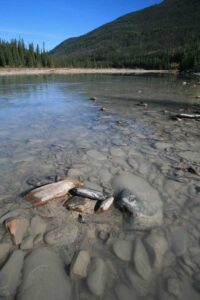 The Kicking Horse River is lined with glacial silt that has washed down from the Continental Divide. 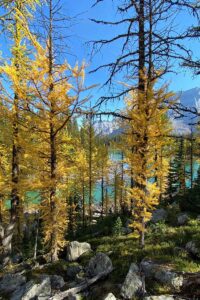 The Lake O’Hara region is dotted with larch forests.

The park’s only watershed is that of the Kicking Horse River, which is fed by the Wapta and Waputik Icefields. The Kicking Horse, wide and braided for much of its course through the park, flows westward, joining the mighty Columbia River at Golden. The park has many individual geological features of interest, including Takakkaw and Twin Falls, Natural Bridge, Leanchoil Hoodoos, Emerald Lake, and Lake O’Hara.

Elevations within the park cover a range of more than 2,500 metres (8,200 feet), making for distinct vegetation changes and more than 600 recorded species of plants. Douglas fir is the climax species at lower elevations, but lodgepole pine dominates areas affected by fire. Western red cedar, hemlock, and the delightful calypso orchid can be found in the damp eastern shoreline of Emerald Lake. At higher elevations, where temperatures are lower and precipitation is higher, the familiar subalpine forests of Engelmann spruce and subalpine fir thrive. The northernmost extent of larch exists around Lake O’Hara. Larch is a conifer (evergreen), but its needles turn a stunning golden yellow in fall–a photographer’s delight. Above the tree line, where wind and rain have deposited soil, wildflowers such as heather, Indian paintbrush, and arnica create a carpet of colour for a few short weeks in midsummer.

The animals for which Yoho is best known are fossilized in the Burgess Shale and have been dead for more than 500 million years. But they still create great interest for the role their remains have played in our understanding of life on earth in prehistoric times.

Large mammals are not as common in Yoho as in the other parks of the Canadian Rockies, simply because the terrain is so rugged. Valleys are inhabited by mule deer, elk, moose, black bears, and a wide variety of smaller mammals. Porcupines are common along Yoho Valley Road. The park has a healthy population of grizzly bears, but sightings are relatively rare because the grizzly tends to remain in remote valleys far from the busy Trans-Canada Highway corridor. Much of the park is above the tree line; here noisy marmots and pikas find a home, along with an estimated 400 mountain goats. More than 200 bird species have been recorded within the park.