The history of Yoho National Park begins many thousands of years ago with the Kootenay and Shuswap people of British Columbia, who were the first humans to travel through the rugged area that is now Yoho National Park. It’s believed the men hid their families in the mountains before crossing over to the prairies to hunt buffalo and to trade with other tribes. On their return they set up seasonal camps along the Kicking Horse River to dry the buffalo meat and hides. They used a more northern route than that taken by travelers today, crossing the divide at Howse Pass and descending to the Kootenay Plains beyond the present-day junction of Highways 93 and 11. 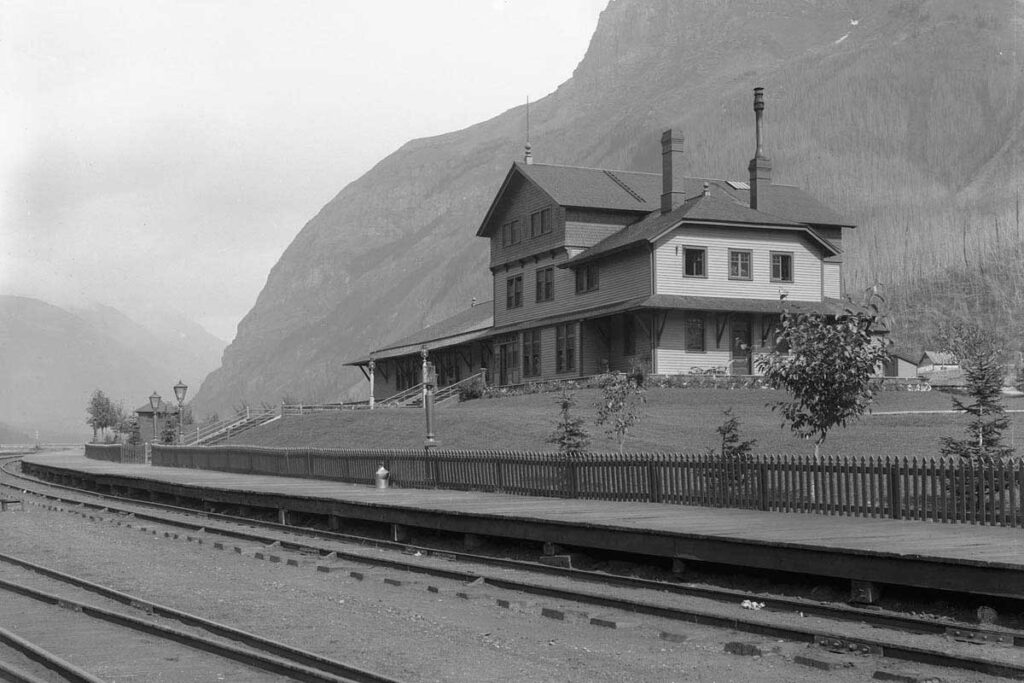 The original railway station in Field was built in the 1880s.

The first Europeans to explore the valley of the Kicking Horse River were members of the 1858 Palliser Expedition, which set out to survey the west and report back to the British government on its suitability for settlement. The party approached from the south, climbing the Kootenay and Vermilion watersheds of present-day Kootenay National Park before descending to Wapta Falls. It was here that the unfortunate expedition geologist, Dr. James Hector, inadvertently gave the Kicking Horse River its name. While walking his horse over rough ground, he was kicked unconscious and took two hours to come to, by which time, so the story goes, other members of his party had begun digging his grave.

Guided by outfitter Tom Wilson, Major A. B. Rogers (for whom Rogers Pass to the west is named) surveyed Kicking Horse Pass in 1881. His favorable report to the Canadian Pacific Railway (CPR) led to this route being chosen for the much-awaited transcontinental railway. The railbed was laid in 1884, and its grade was terribly steep; the first train to attempt the run suffered a brake failure and derailed, killing three workers. In 1909, after dozens more wrecks and derailments, the CPR rerouted the steepest section of the line through the Spiral Tunnels. The highway now follows the original rail grade.

The small township of Field started as a railway maintenance depot at the bottom of treacherous Big Hill. In 1886 the CPR opened Mount Stephen House in Field, both to encourage visitors to this side of the mountains and as a dining stop for customers of the railway. The CPR then built lodges at several natural attractions in the area, including Emerald Lake Lodge in 1902, Lake O’Hara Lodge in 1913, and Wapta Lodge Bungalow Camp in 1921.

As in adjacent Banff, the coming of the railway was a prime catalyst in the formation of Yoho National Park. Upon the opening of the railway line in 1886, 2,600 hectares (6,425 acres) of land around the base of Mount Stephen were set aside as Mount Stephen Park Reserve, Canada’s second national park. In 1901 the reserve was expanded, and after three further boundary changes, the park of today came into being in 1930. Mining of lead, zinc, and silver continued until 1952, and today remnants of the Monarch and Kicking Horse Mines can still be seen on the faces of Mount Stephen and Mount Field, respectively.